Scholarship: Congratulations to Michelle Hackett on her recent achievement, an Academic Sports Scholarship with Athlone IT. This is wonderful news for one of our Leaving Cert class of 2018. Michelle has been called to play with the first team while there, playing Ladies Division One. Golf continues too, of course!  Well done!
School Breakfast: A wonderful initiative started in school this week, seeing MCC work with Food Cloud to supply breakfast two mornings a week to the school, for students who are in from 8.30 am. Tea, toast and fruit are available & students took full advantage of it this week, enjoying the early morning socialising! Thanks to staff and students volunteering their services, we look forward to its continued success.
Sports (Football): Another busy week at MCC for our teams! The U-14 girls took home a victory from their match away against Ballinamore (Friday 19th), with Ms Fitzpatrick leading our charges. They were in action again on Wednesday 24th against Lough Allen, in Drumkerrin, with Ms Mitchell & Ms McNabola, securing another win in a tightly fought game with a score of 2-8 to 1-8, well done ladies. On the same day the U-19 ladies won their contest against Lough Allen with a score of 6-17 to 3-10. The boys U-16 football took on Drumshanbo at home, with Mr Kennedy in charge. In a close encounter, a draw was the outcome; however this is enough to see the team through to the Round of 16 in the Connaught championship.
Sports (Basketball): Our U-16 girls played Tubbercurry, at home in MCC and emerged triumphant after a great game, with Ms Hargaden Ward in charge on the sideline. Ms McGovern and her U-16 boys also took home a win from an away game in Ballymote. Well done to all students and staff who are working hard with teams, alongside working hard in class!
Midterm Break: We wish all of the Mohill Community College staff & students a happy & relaxed week off after a hectic term. We look forward to seeing everyone back on Monday 5th November, ready to take on the next round of school adventures! 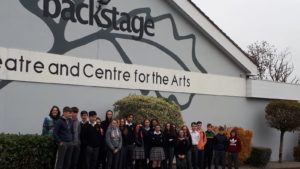 A group of MCC students from 3rd Year and Transition Year recently enjoying an outing to The Backstage Theatre in Longford as part of their English studies, with Ms Reynolds & Ms McNabola 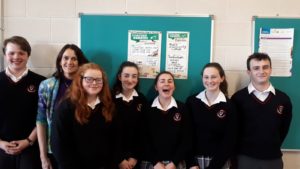 The MCC debate team with mentor Ms Reynolds, before their debate with Manorhamilton. The team will move onto the next round of the competition following a closely fought battle.

School Mass: Last week, students & staff attended mass in St Patrick’s Church, to celebrate our school year. The theme of the Mass was Light, with the celebration accompanied by our wonderful school choir. Many thanks go to our Religion Department and all participating students & teachers for their organisation.

Soccer Outing: The Nations League encounter between Ireland and Wales was attended last week by a group from MCC, heading to the Aviva after school, in the hope of witnessing victory. Alas, a defeat was in store.  However, an entertaining evening out was had by all. Many thanks to Mr Kennedy, Ms Flynn, Mr Shortt & Mr Gannon for accompanying the students.

Congratulations: Well done to Saoirse Fox, Leaving Cert class of 2018 in MCC, for receiving a scholarship towards her continued studies, from Aurivo, for her efforts and study in Agricultural Science. A wonderful achievement!

Girls Active: With much appreciated input from Michelle Fanning from Leitrim Sports Partnership, the Girls Active group are going strong in the gym on Tuesdays from 4:15 – 5pm. Call in or chat to Ms Purcell for more details if interested.

Sport: It has been a busy sporting week in MCC. First up, on Wednesday 17th, Mohill played Coola in boys football, in Mohill. Our U-14 boys took the win at home, in an entertaining 3-13 to 3-7 victory. Thanks to Mr Duffy for team management. Our first year boys also took victory against Coola that day, winning with a scoreline of 3-5 to 8 points, well done to the boys and Mr Nolan for their continued success. On Thursday, the boys were in action again at home, this time in basketball versus Ballinamore. While our U-19 team were unlucky to suffer a defeat, the U-16 boys took a brilliant victory against the visitors. Great to see our long-awaited development of the school pitch coming to life with our school football competitions.  Thank you to Ms McGovern for her work with the basketball teams. As we go to print, the girls are away at football, so check back in next week for updates!

Geography Field Trip: With the much appreciated guidance & organisation of Ms McManus & Ms Scollan, our leaving cert Geography students headed to Derrygonnelly centre in Fermanagh last Tuesday, to continue their project studies. The weather thankfully allowed the students to get the best from the trip, with both teachers & students agreeing the excursion was of huge benefit to their studies.

Senior Boys Gaelic: Our Senior Boys played Lough Allen College in Drumkerran last week where they were defeated. In a tightly fought game, where they were missing a number of key players due to injuries, the boys put up a good fight but a strong Lough Allen team pulled away in the last 10 minutes. Thanks go to Mr Shortt for his management.

Girls Basketball: Our girls were in action away to Boyle last week. Both the under 16 and the senior team came away with victories after tough matches, well done girls! Thanks to Ms Hargaden Ward for team management.

Brady Cup Blitz: On Tuesday 9th, our first year boys won the Brady Cup, in the Leitrim Centre of Excellence. All of the Leitrim secondary schools were present on the day, so it was a huge achievement for our first years to take the cup home, beating Carrick in the final. Well done boys, congratulations to both the team and Mr Nolan! 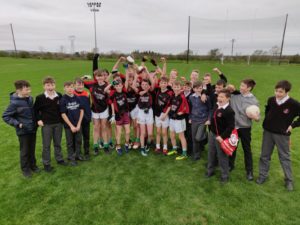 Girls Active: A reminder that Girls Active is up & running again, each Tuesday from 4:15 – 5pm in the gym. Speak to Ms Purcell for more details, we look forward to seeing you there!

Business Studies Award: Congratulations to Liam Ellis & Robyn Gaffey on receiving an award from NUI Galway College of Business, for outstanding academic achievement. Both students achieved an A in Honours Junior Cert Business Studies. Congratulations also to their teacher, Ms Fitzpatrick, who played an important role in this award. Well done to all!

Basketball: On Wednesday our basketball team were in action against Boyle, in Boyle. While our Under 16 boys lost their match, despite a great effort, our Under 19 boys took home a victory, under the management of Ms McGovern. Well done to all representing MCC.

Football: It was the ladies turn to get their football season underway this week, entertaining Carrigallen at home in MCC. The Under 14 team suffered a loss, although they gave their opponents a fright with a determined comeback and our Senior team took the win at home with a great display. Thanks to Ms Mitchell for management and the girls for their efforts!

Ecology Trip: 6th year Biology students with Ms Nertney made the short but very worthwhile trip to Lough Rynn for an Ecology Study last week. The weather cleared just in time for the group to have a guided tour of the gardens by the head gardener, Stephen who led the students through both an historical & scientific journey of how different flora and fauna came to be in the area. A sincere thank you to all in Lough Rynn for hosting the group.