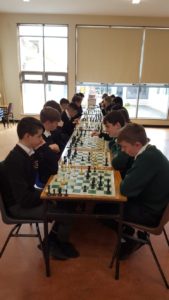 Chess is a universal game, knowing no boundaries of age, gender, faith, ethnicity or disability, that promotes key intellectual skills such as problem solving, logical thinking, pattern recognition and concentration. Playing chess also fosters intellectual character. Its cerebral reputation boosts self-esteem and gives children grit and the tenacity to cope with adversity – which helps them grow into rounded and employable individuals. It does this by teaching children through play how to lose and how to win gracefully, to think ahead and foresee the consequences of their actions. That is why we see it as an integral part of education here at Mohill Community College .

Last Monday we travelled to St Clare’s Comprehensive, Manorhamilton to play  a friendly  chess  tournament . The students, mainly from Junior Cycle, were nervous as it was their first chess tournament this year but they were soon put at their ease by the warm Manorhamilton welcome from St Clare’s.  Ushered to the Library the pristine chess boards waited silently  while the students waited patiently .

Ms Kilcawley, from St Clare’s  had the pairing ready to go  and as it was a friendly match the colours were chosen by the captains Michael Mc Donagh for Mohill Community College and Edward Mitchell for St Clare’s Comprehensive . The former started on white having won the draw and once the players shook hands with their opponents the fun began with the teams alternating colours round by round .

Every player got at least two games and when the first games were over the results were recorded on the pairings sheet. This was used to pair the next round but even if players lost a game, they were not eliminated.  This is another positive of  playing chess: players   continue to participate until the final round ends, regardless of their results.

As  directors of the event  Miss Kilcawley and I  announced the standings during the proceedings so the teams could see how they were doing. While the tournament was a friendly both school enjoyed the competition and look forward  to competing against each other in ChessOssity and the Irish Chess Union events which will be taking place before the end of the year.

Both  schools  have active chess clubs where the students gather to enjoy chess for all its above benefits but also to prepare for local  National and International  Competitions.

Board of Management Agreed Report February 2020

Message to Students
Scroll to top